Farewelling New York, we boarded the Amtrak train to venture south to the Capital – Washington DC. Great wheelchair access via hoists to the high train carriage and luggage support from the Red Caps. And yes Steve’s large scooter did fit! Carers/companions get discounted fares. I love a good train journey and this was an exciting one. Our stops included: Newark metro city, New Brunswick, Trenton, Philadelphia Pennsylvania – where the Declaration of Independence was signed, Baltimore Maryland, Wilmington and Delaware. Places I hear about in books and in movies and TV shows. But we were here in real life – still pinching myself! 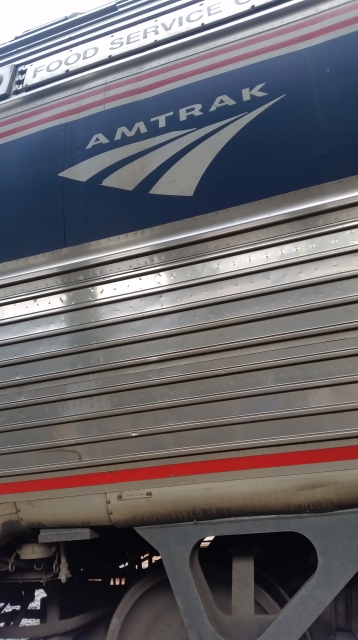 Union Station was so magnificently grand – but the humidity as we left the station was horrendous! Our hotel was just a short wheel away in the attractive Capitol Hill neighbourhood, and offered exceptionally friendly service. We enjoyed complimentary breakfast and wine time at 5pm each day.  That night it was dinner and drinks at the pub just around the corner – and the fierce but short storm kept us there a little longer – how convenient!

Our first full day in DC and we set out to explore it’s glorious buildings, the Capitol Building, Library of Congress, Washington Memorial. Lots of families enjoying the Summer outdoors playing soccer and having picnics along the Mall. We joined a tour of the Smithsonian Castle which showcases each of the 19 free museums, 12 gardens plus a zoo! How do you choose which museums to visit in 4 days? The biggest house in town was calling us and we managed to contend with the sea of tourists, selfie sticks and sticky weather to get a glimpse of the south lawn of the Whitehouse. On the long hot wheel back to the hotel we grabbed Mexican ‘to-go’ for a late lunch early dinner.

The weather pattern in DC was pretty consistent during our time there; stinking hot and humid all day, until big storms blow in at about 5pm, heavy rain til around 7pm and its all clear again. This meant time for an evening stroll around the delightful streets with colourful terraces. It was so fun chasing the sun on the Supreme Court with the ominous big black clouds approaching. There was a buzz in DC, reporters, high security presence and always something happening! 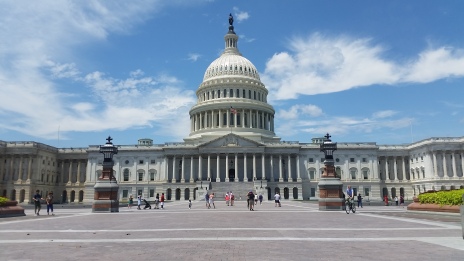 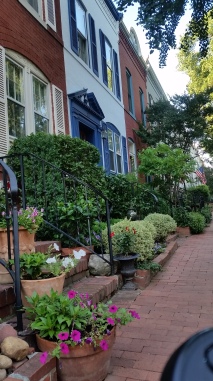 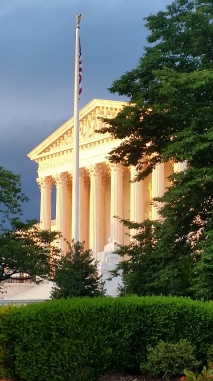 A metro train station was located just a couple of streets away from our hotel so I hopped on the fully accessible Metro to save battery power….great idea but …..whoops I went the wrong direction to meet Steve at the Lincoln memorial! It was pretty easy to get off at the next stop and get a train back the way I was meant to be going. But of course Steve beat me to the Lincoln Memorial! We had our Forest Gump moment and found the Martin Luther King I have a Dream speech inscribed in marble on the very place he gave his inspiring address.  Unfortunately, the elevator to the top of the stairs was broken but we met a lovely family from California whose son Michael offered to run up the stairs to take some pics of Lincoln Statue for us. So kind!

Then we visited the Vietnam memorial and onto the North lawn and front of The Whitehouse. Saw loads of secret service just standing around looking important. After a great photo session we decided to visit the Museum of American History. It had great exhibits on transport, inventions, first ladies’ dresses, American stories and an awesome film American Musical Journey 3D starring Aloe Blacc. This showcased the variety of American musical genres from Louis Armstrong to Gloria Estefan and Elvis. It made me very happy! Steve and I spent a beautiful dinner together at the Hawk and Dove Tavern, followed by a magical stroll around the capitol buildings all lit up – we were in awe!!!

Its impressive that all DC Metro stations and trains are accessible – I just needed to figure where to get on and which way I was going! 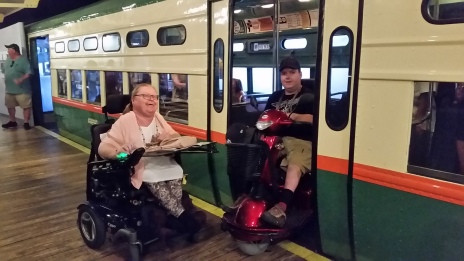 So many cool stories

We took a fascinating tour of the Capitol Building with a great guide called Charles. The first part was a movie on the short history of the US Union since the first 13 states. Such exquisite detail on the dome. We almost went in to witness Congress in action but it was a long wait so instead we went through the tunnel to the incredible Library of Congress and its captivating great hall!! Ice cream and National Botanical Gardens. Motorcade went by think it was Trumpy….or was it a decoy?

DC was a city of contradictions. We were struck by the lush green space and gardens, contrasted with the incredibly strong architecture. There were reporters, and lawyers and armed people everywhere and yet it felt like we were welcome, and the wheelchair access was awesome. It was extremely humid, with rain storms almost every afternoon – but they didn’t last long. During the day there was a buzz in this place and at night DC was enchanting. DC, you totally captivated us! 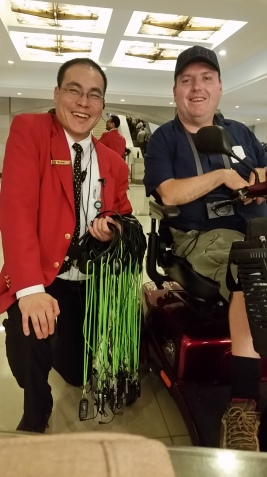 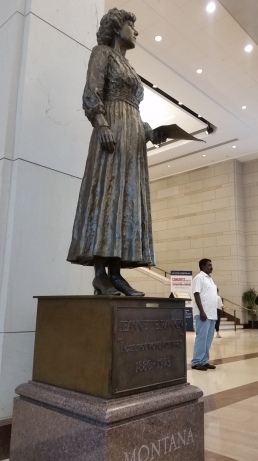 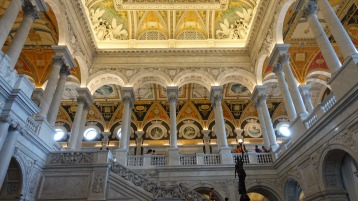 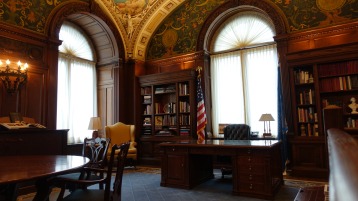 A room in the Library – How West Wing!

Travel day. Sadly our time in DC was short but very sweet! We took 2 shuttles to Dulles Airport and got the airport train to the Gate! A new experience for me and very accessible. In fact, we had exceptional service from United staff Terri and Warner, which helped us cope with a 2 hr delay. Next stop Vegas baby!

View all posts by cazza1974

Find Me on Linked In